What is Four Roses?

The story of Four Roses Bourbon is one of love as depicted in the story told on the bottle. Dating back to the late 19th century, Four Roses is regarded as one of the better bargain brands in bourbon.

Coming in at between 20 and 25 dollars, the entry level Four Roses is quite pleasant. Easy to drink neat, over ice or as the star ingredient in a mixed drink. 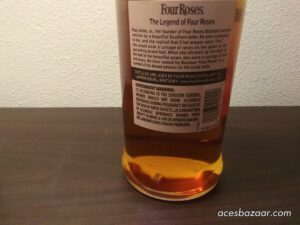 Coming into my first encounter with Four Roses, I was disappointed with the nose. So many favors fighting for dominance yet none standing out over the others. Not to say that the nose is bad, I’ve just smelled better.

Just as with the nose, the taste is a barrage of favors, nothing really standing out. If I had to pick a couple of flavors to give Four Roses it would be pear and pepper. Needless to say, Four Roses is not particularly sweet, especially in comparison to other bourbons such as Jack Daniels or Bulliet.

While bourbons are not a staple of mixed drinks anywhere outside of the south eastern United States, this is where Four Roses can shine. Because it is not ungodly expensive nor is it particularly overpowering in a specific flavor, Four Roses is a good key ingredient for a mixed drink. On the website, there are 2 recipes for Tom Collins that are definitely worth a try.