In the late winter, early spring of the past few years has been the signal of the beginning of the Crown Royal Peach season. Following flavors, apple, vanilla and caramel, the peaches seasonal availability creates a buzz unlike any other.

The first year it was available I was not interested as I am not much of a flavored alcohol enthusiasts. Liquor store in my area where not able to keep it in stock and I am definitely not one to fight over such things nor am I willing to pay double or triple the price just to say “I got it.” I just recently came into the opportunity to get some and now I definitely understand the hype.

At first sniff, Crown Royal Peach is definitely peachy but not overpowering. You will lightly smell the traditional Crown Royal flavors underneath the peachiness.

As with the scent, the taste is peach flavor over top of traditional Crown Royal. At a reduced potency of 35% abv the alcohol does not fight with the added flavor like many alcoholic mixtures. This creates a pleasurable experience neat, on the rocks or in a mixed drink. 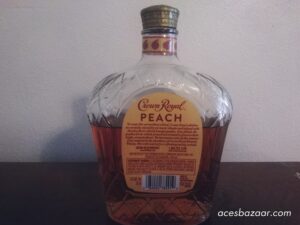 Crown Royal Peach has the real ability to shine in a mixed drink. It could be used a substitute for peach schnapps or add a peachy flavor punch to any mixed drink that requires a whiskey.

Many people like Crown Royal Peach so much that its a daily sipper for them when its available. For me, its cool for a mixed drink that requires a peach flavor when it is in season.  In my opinion, the peach is much better than the Crown Royal Apple but not as good as the vanilla flavor.

Have you been able to get your hands on a bottle of the ever elusive Crown Royal Peach? Feel free to share your experiences good, bad and ugly.